Boston based party rock sensations Cougar Bait are set to get the floor moving when they grace us with their presence this coming Friday 5/12 @ Mid East Upstairs. The trio composed of Sean Sullivan, Jamie McCarthy, and CT Luscious is a must see attraction with their high energy electro rock beats pulsating through every square inch of your body that just implores you to head out onto the dance floor to experience this one of a kind act. I had the opportunity of checking them
44 views0 comments 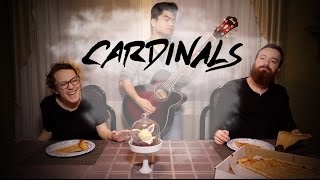 Boston based pop-punk sensations Cardinals have released an acoustic video for their song "When I'm Gone". The clip presents the duo in an entirely different setting than they're accustomed to, and reveals parts of their innermost personalities that are just yearning to bubble up to the surface. You may remember the act under the name Tighticus Finch, and the duo says that changing their name reflects shifts going on in their personal life, plus realizing that the sound had e
23 views0 comments

Photo Credit: Stanisław Nagięć Boston based Sinnet is gearing up for the release of their brand new album next week, 5/8 called "Gentle Humor". The album adds an indie rock flair with sprinkles of pop sensibility and intricate songwriting to create a impressive musical blend that will make you feel at ease right away. One thing that I enjoyed immensely about Sinnet was their laid back and carefree nature that manifests itself well all throughout their music, and allows you to
20 views0 comments

Photo Credit: Kris Dobbins Locally grown singer-songwriter Katie Dobbins is gearing up for her big album release show on May 7th, taking place at The Burren Backroom in the heart of Davis Square in Somerville. Katie has an authentic, down home country feel to her similar to the likes of Carrie Underwood but with her own unique portrayal of down home singer-songwriter fare. Her sound lands her in a more traditional folk style, but you pick up trace derivatives of country inter
73 views0 comments

Photo Credit: Coleman Rogers Boston based roots rock quintet Daemon Chili have released their brand new album just last week titled "Mercy of The Sea". The group have a raw, vivacious sound to them that has elements of blues and folk juxtaposed on top that provides for an entertaining and thorough mixture that really turns heads the moment you hit 'Play'. I was definitely impressed with what I heard from these gents, and they have a strong musicality to them that works wonder
14 views0 comments

Boston based Mailman Carl have just released their brand new self-titled LP on Bandcamp. If you're not familiar with these guys, their sound is mostly comprised of a rock/psychedelia infused blend with elements of folk and punk to strike off the balance, and bring in a amalgamation of each member's individual influences to create something that is truly wacky and out of this world. When I first listened to them, their music was all over the place and was kind of hard to find
32 views0 comments

Starting off the week with an interview featuring Boston indie newcomers New Dakotas. You may have caught my feature on them a couple of weeks ago highlighting their lush and mellow sound that seems to be making a lasting impression on concertgoers in and around the area. Alasdair and Charles were nice enough to devote some time to sit down for an interview as we seek to find out more about the guys, how the outfit got started, what their primary musical influences are, their
55 views0 comments

Photo Credit: Lauren Garant Boston's premiere indie psych/math rock quartet Bat House are gearing up for the release of their self-titled album next Friday 4/14 with their brand new track titled "Chemical X". The track bounces off the musical walls feverishly, and delivers a potent punch that satisfies the music junkie inside of you, and makes you even more musically curious as you listen intently on what stops the band are going to pull just around the corner. The guys have
34 views0 comments

Boston natives Jocelyn & Chris Arndt have just premiered their brand new single via AXS recently called "Footprints on The Moon". The captivating and hypnotizing vocals of Jocelyn hit you like a ton of bricks the moment the song begins playing, and you immediately fall under the hypnotizing power of this captivating duo. The brother-sister combo have been featured on the site previously, and I commented on how they would be a force to be reckoned with in the future with thei
59 views0 comments

Boston based indie duo bird.bird have just released their captivating new album "Blue Egg". The 9 track effort is an easy going, very intriguing effort that shows the warmth and beauty of these outstandingly talented gentlemen. Composed of Mike Healey and Cooper Evans, these two guys put together their combined creative ingenue into something truly awe inspiring and beautiful beyond compare as it doesn't take you long to fall in love with what these guys have created. This ef
104 views0 comments

Locally based synth outfit Kite Jennings have just released their latest effort titled "In Cinema". The sprawling, 5 track effort is a dreamland paradise with ambient melodies designed to transport you away from the doldrums and into a soundscape land where there is a certain serenity and provides the perfect escape from your own reality. Synthpop has an inherent beauty to it that can't adequately be described, but the key element is the desired musical effect it has on the l
35 views0 comments

Local Boston punk rock sensations The Digs just released their brand new EP just last week called "Kinetic". The quick moving, 4 track set encapsulates everything there is to love about this local trio, who have slowly been making a name for themselves with their hard nosed vibe, which has an easy accessibility to it so that even if you're not a punk rock junkie, you can definitely find something to appreciate about these gents and find a common ground musically. These guys a
20 views0 comments

Photo Credit: Saul Urbina Johnson Boston based indie collective New Dakotas make a dent on the local scene with their all new, self titled EP. The group consists of Alasdair MacKenzie, Charles Winston, Trevor LaVecchia, and Chris Haley. The band's sound is a mellow form of indie rock that has a pop/rock twinge to it that allows the band to stay within the confines of their comfort zone, where their magic and musical essence really shines bright. The guys really stood out to m
76 views0 comments

Boston's own pride and joy Radclyffe Hall are gearing up for a big local show happening next Saturday 4/1 when they grace the stage at Great Scott in Allston along with the likes of Raine and Photocomfort. Radclyffe Hall have been climbing up the local music pedestal in Boston for some time with their hypnotic style and defined musicality that is most evident on their brand new single "The Throne". The band evokes the stylistic trend of M.I.A. with a sonic progression that is
24 views0 comments

Photo Credit: Branson Laszlo Boston indies The Solars have just unearthed their brand new single titled "Potter's Field/Dockery". The song's warm, mellow, and inviting nature will definitely comfort your eardrums as the song picks up in intensity with its vivacious percussion melodies and overall musical enjoyment infecting you from the onset as the track settles in. You may remember these guys from my post a couple of months ago when I featured their debut single "Old K.B."
47 views0 comments

PREMIERE: Check Out The Latest From Boston Indies Arms and Ears Titled "Bamboo"

Boston indies Arms and Ears make their triumphant return with their brand spanking new single just released this morning titled "Bamboo". The high energy, melodic explosions heard will definitely jolt you out of the winter doldrums and gear you for the warmer weather hopefully coming around the corner. Frontman Rocco D'Angelo has a very easy going way about him, and he brings that overwhelming positivity with him when you meet in person, and also on stage that really makes yo
69 views0 comments

Starting off your Thursday with an interview featuring Boston, UK based The Ultraviolet. The band's sound is reared somewhere between the alternative and pop-punk genres with a heavy dose of melody injected into their music that makes the guys hot tickets right out of the gate. With all of these diverse bands coming from across the band, there is definitely a musical revolution that were in the midst of coming over from the UK, and The Ultraviolet are just beginning to get sw
8 views0 comments

Photo Credit: Hana Kahn Boston based indie folk group Jakals have just unearthed their brand new single titled "Keep Mother Sane". The track is a beautiful, honest portrayal of a burgeoning talent who have a deep bond and shared love of music, and that comes through brilliantly in the opening seconds of the track. Frontwoman Katie Solomon's voice is absolutely brilliant and superb, and touches off an emotional nerve that really makes you yearn and listen to the track multiple
111 views0 comments

Local treasures Oh Malo are gearing up for a huge, 2 month long spring tour that will see the band cris-crossing the country in an effort to expose their music to people outside of the New England region. The tour kicks off April 15th in Fox Point, RI before heading down to Texas at the end of April, the band will be on the West Coast in early May before making their way back east again in early June, and will be playing a Boston show on June 2 along with a couple of other Ne
44 views0 comments

Photo Credit: Alex Humphreys Boston local outfit Bat House have just released their playful new track titled "Yarn", from their upcoming self-titled album due to be released on April 14th. The track features a bevy of musical tempos and genres that find themselves well on the musical page, splattered here and about just enough for the listener to pick up the pieces and assemble. These guys have been featured on the site before, and I marveled at how they were unlike anything
11 views0 comments
23
4
56